There could have been updates that change commands below since the time this guide was written. For the most up to date documentation on Entropy and all commands, the Entropy wiki is the source of truth: https://entropy.exspes.com/wiki/index.php/Main_Page

Entropy heavily uses mq2dannet so I will give a lot of setup instructions using dannet to issue commands to characters.

My use-case for Entropy is to run a raid of 30+ characters, however I wrote this guide with a brand new group on Live server using MQNext. My goal with this guide is to get you through these steps:

1. Install
2. Setup group movement (similar to chase mode in other tools)
3. Setup a tank in a camp radius
4. Setup a simple healer
5. Setup a puller to the camp radius
6. Setup a rogue dps to backstab and assist the tank

That will be the start, and is surprisingly simple to get going. Later I will add some more information about how to start using tags / setup casters/heals etc.

Install instructions for Entropy are well documented on the Wiki: https://entropy.exspes.com/wiki/index.php/Install
If for some reason it does not load, read the error message and it will tell you exactly what is missing. Likely causes (which are all documented in the instructions)

When it's done you should see something like this where it says Ready: XXs 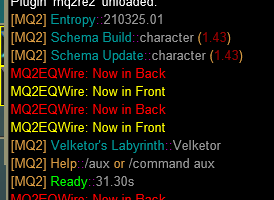 2. Now you can run the macro on all other chars: /dgge /mac entropy\start

Now you will build your "crew"
On your driving toon (this is typically my Tank character), invite everyone to group, and set the tank as MT and MA in the UI.
- Build the crew: /crew buildas CREWNAME

You should see some output with group member names and SUCCESS messages. Now you can test if the crew form works.
From here on out you can now use entropy to setup the group. To test this, first disband everyone:

Now form the crew with entropy:

For me the first step was getting comfortable with moving chars around. Entropy does this with the Tie command (https://entropy.exspes.com/wiki/index.php/Tc) This is very similar to chase mode for other tools

First set the /tc mode, I use 'nav' so that they will use mq2nav. Then set the name of the toon you want them to follow (typically your group leader)

Since everyone is in group we can use dannet to do this: (/dgge will send to everyone in group except the one that sent the command)

Now you can have the group follow you by using:

They should now be chasing you around. To make them stop chasing you:

These are the only two follow commands you will need. The difference between "Chase and fight everything with me along the way" and "follow me but don't fight anything" comes from having characters in manual/auto mode which we will cover later.

Basic Tank / Camp Setup
This will be a variation of what's on the "Quick and Dirty tank setup" on the wiki, and I will try to correlate the settings to other tools. The goal here is to get a character tanking mobs in a camp as the main assist, and another character pulling mobs to that camp.

We'll be using the following commands:
Pull: https://entropy.exspes.com/wiki/index.php/Pull -> Everything to do with pulling, similar to pull section of an ini, one difference is for the main tank you will want to set a pull radius equal or less than your home/env radius so that the tank will engage 100% hp mobs when they get within that distance

Home: https://entropy.exspes.com/wiki/index.php/Home -> This is the main "camp" commands. The set command is the same as setting /camphere and gives some flexibility to how you engage targets within that camp radius

Env: https://entropy.exspes.com/wiki/index.php/Env -> This is more general macro settings, one of which is again radius. Anything outside that radius is out of range

CC: https://entropy.exspes.com/wiki/index.php/CombatControls -> This is where the different modes are turned off/on. Things like nuke, dot, heal etc, which all correspond to a different rotation. Those rotations are triggered using tags which we will cover later

Run these commands on your tank character. Set the character as Main Assist in the group window

/pull rad 30 <-- will engage anything within 30 rad even if mob is at 100% HP. This is basically like setting your campradius to 30 in tank mode.
/pull with melee <---- engage whatever is within that 40 radius with melee
/pull active on <----- Enable the pull so you will engage
/pull mode base <----- Use stick to get to the mob (since it will be inside LOS in your camp this should be fastest way to get to the mob)

/home deathclear on <---- this will reset your "home" (which is the xyz coordinate for your camp) when you die
/home incombat on <----- stay within the camp radius set within /env rad that we set later
/home facefast on <---- quick face target when engaging in camp
/home onauto on <--- We set this so that when we use /here, it will set the current position as home (like doing /boxr camp / camphere)

/cc mode melee on <---- this turns on melee mode for combat controls, this is similar to enabling melee section in a kissassist INI, and will enable the melee rotation you setup using the /melee commands (which we will get to later.

/env rad 40 <---- this is again a radius for your camp. This radius applies more broadly to every aspect of the macro, anything out of this radius is out of range


At this point the tank will be standing in place and ready to engage any mob that comes within a 40yd radius.

Setup the Puller (I used a monk)

Start the Party
From your tank character, bring everyone to the spot you want to camp.
Use /here to set this as the spot for everyone in the group (except the char that issues the command)

Then on the tank:

The puller should now run off to go grab a mob and bring it back to camp. The tank should engage once it gets into the 40yd radius, and all chars should start melee once the mob is 99% hp or less. The healer will heal and rest to full (even through combat) once it gets to 40% mana. The puller will take a break if anyone in the group reaches 40% hp/mana.

To stop everyone, from the tank issue the command:

Then turn off the tank with:

If you need to ignore / exclude mobs from pulling, use the following command on the puller when the mob is targeted:

Running into issues? Character just standing there doing nothing? One of the best parts about Entropy is the ability to quickly debug using the /debug command (https://entropy.exspes.com/wiki/index.php/Debug)

For example, "Why isn't my puller pulling?"
On the puller, debug the pull function:
/debug combat pull

You should now see tons of information regarding what it's trying to look for / do in the pull routine. If you see no information, that means you aren't making it to the pull routine and need to just keep stepping backwards till you get to the proper routine.

To turn debugging off do:
/debug stop


Shaman Buffs:
Once I hit level 9 I jumped into setting up some buffs

/buff 1 tag crew|group|self|nocombat add <---- These tags mean the buff will be used on crew (your entropy toons), group (everyone in your group even if they are not running entropy), self, and only when not in combat

Entropy uses timers to space out buffs and keep things looking more natural. The default time on that cycle is 1m, but can be dropped to 15s by editing the tiCheck_Buff_Cycle variable.

At this point the shaman (make sure they are turned on with /env auto on or by issuing the /on command from DRIVER toon) should start buffing everyone in the group. You can also force a buff cycle by using the command:

There is also a very cool method of adding buffs using SPA to add buff categories, so that they will dynamically resolve as you level. You can read more about that here: https://entropy.exspes.com/wiki/index.php/Buff#SPA_Method

Load spirit of Ox (sta buff) into gem 7
Earlier we set /buff 2 to stamina buff so we just now do:

Setting up Bard
Again at level 9 picked up a few bard songs and set these up. Making use of the tags again, the built-in tags for pulseXXX are used.

**To be continued**
As I level this set of characters I will continue to add more detailed setup of healers / bard, as well as things like auto rez and general group management using entropy.