A short link to this manual: kissassist.com

KissAssist turns any EverQuest class into a personal assistant, like an advanced mercenary. It's a popular choice for multi-boxers due to its flexibility and easy-to-read configuration (.ini) files.

This wiki page serves as the instruction manual. The latest version of KissAssist can be downloaded on the resource page. Other useful links include the .ini library, discussion thread, discussion forum, and support forum.

KissAssist will not work without configuration. EverQuest presents too many obstacles for one configuration to work in all circumstances, so you'll have to learn to change spells, buffs, and abilities. Thankfully it's easy, and there are some shortcuts, such as using other's configurations and a beginner's walkthrough.

Without having a target selected, type "/mac kissassist"

KissAssist will generate an .ini file that looks like "KissAssist_Charactername.ini" in your config folder. Once the macro ends, you can proceed to edit the .ini to your liking. You must edit the .ini for KissAssist to work, it does nothing out of the box.

Target your main assist and type "/mac kissassist" and kissassist will automatically use your current target as the assist and use the predefined role set in your .ini. Alternately, you can make specifications on startup:

For tank characters, you can have them assist themselves, which will make the tank decide which mobs to target. It's generally a good idea to have your tank decide which mobs he is to tank if a real player is not going to be the main assist. Characters with Tank Roles will default to themselves as MA. You should have only 1 character in your group set in a Tank role and all other characters should be in an Assist or Puller roll.

The optional [KissRole] startup modifier is used to define which role you will be in when starting KissAssist. If you choose not to define a role, KissAssist will default to whatever role you have selected in your .ini file.

The optional [AssistsName] startup modifier is used to declare who you will assisting. This can either be someone else, or if using either puller or tank modes, you can declare yourself the main assist. You MUST have a target selected if you choose not to declare a main assist when starting Kiss.

The optional [AssistHealth%] startup modifier is used to define specific melee assist settings. By default (without using the modifier), it will be 95, or whatever your .ini defined values are in your Melee settings. This setting only applies to melee and /petattack.

Alternate ini files: You can also tell KissAssist to load an alternate ini file. If your wizard has a separate ini to use ice nukes instead of fire nukes or your tank wants to run a DPS setup on easier content, you can just save another ini file and load that instead of your defaults, e.g.

More startup options can be found on the /mac kissassist page.

The following commands are used for on-the-fly changes while KissAssist is running (if KissAssist is not running, they will not work.) Most of these commands mirror values in your KissAssist_Info.ini or KissAssist_ToonName.ini. Changed values are persisted to your ini(s).

KissAssist uses several configuration files, but the most common are:

Once the KissAssist_CharacterName.ini has been created in your Macros folder, edit it with your favorite text editor.

Default roles can be assigned in your KissAssist_ToonName.ini or overridden at startup using the modifiers listed above

Role Values - Use the following list to determine and define your default role.

Very Basic Syntax: DPS1=Spell/AA|MobHealth% -- There are a bunch of modifiers you can use to fine tune this, please see the #Extra section below!!!

* If you edit your dps section often, setting the mobhealth value to 0 disables the line, example: DPS4=Markar's Discord|0

You can apply the debuffall tag specifically to spells you want to cast debuffs on all mobs in camp. Spells without this tag will revert to the default Kiss debuffing style.

Strip tag - is used for dispelling beneficial buffs from mobs.

Always tag - Be careful when using the always tag, because this could cause your character to spam that debuff, if your spell will not overwrite an existing debuff already on the mob.

KissAssist Buffing System - How it works:

Syntax: BUFF1=Spell/AA/Item|OptionalTypeOfBuffMod|Flag/Modifier/Target -- See below for examples.

Instructions to use this feature in other macros

*** Please note, if you edit your heal settings often, leaving the heal percentage at 0 will disable the spell

Requesting pet gear on other characters from your mage
Works with any box communication option, including MQ2EQBC and MQ2DanNet.
EQBC Examples:
/bct magename //pettoysplz ${Me.Pet.Name} - Pet toys: ability to request pettoys on demand for any pet.
/bct magename //pettoysplz GROUP - Pet toys: ability to request pettoys for all group's pets.

KissAssist will single target mez all adds up to the #Mob count indicated in your MezAESpell tag. Once the add count gets to the #Mob count it will use your AE spell. Note: If you set MezAESpell to less than 3, i.e. 2, it will fire your AE mez when there is a double pull and immediately single mez the add. That is why it is recommended to set it to 3 or more.

This feature will keep your mercenary from attacking until mobs health hits a defined percentage. Requires you to turn off Auto Assist in Manage Mercenary Window, which is recommended to keep the merc from prematurely engaging mobs outside of group member radius.

You can use the "/mapfilter castradius #" command in-game to see how large your radius should be (KissAssist will readjust this when you start, it's not permanent)
MQ2Nav:MQ2Nav features can be used in Puller and Pullertank modes. This requires no additional settings in KissAssist to use. If you have the plugin loaded and the zone meshes generated, it should automatically be used. When troubleshooting, try "/nav reload" first! 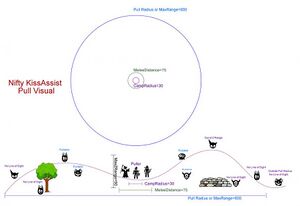 This section is for boosting your groups DPS/Survivability based on named or triggered bind. It can be used as a DPS boost, send your tank into a crazy defensive frenzy or healers to pop all group heals. When the definable burn bind is called the character will give all priority to cast everything in the list. Adjust your KissAssist_Info.ini to define which mobs to burn.

This can let you know if anyone is near while you are temporarily distracted with a bio break. Its a small feature that will beep if PCs come into defined ranged and will pause all macro actions other than killing adds in camp.
Remember: EverQuest is a social game, if you're not interacting with others you should log off. Alternately, you can use the MacroQuest command /mqp to pause until you return.

Depreciated. Currently not supported by MQNext.

This file is also created when you start up KissAssist for the first time, and for each new zone you start KissAssist in, a new section is created in the .ini file. Alternately, you can predefine zones using the shortzone names by adding them using the example listed below. For Instanced zones kiss adds an "_I" to the end of the zone name. This allows for a separate setup for instanced and normal zones.
PullLocs 1-5 are used to EXCLUDE mobs in an area from being pulled. Think of it as MobsToIgnore, but using a physical area. PullLocs must use Y,X map location(s) with a range. The Y,X location is used as the center point of the range and the Range is how big of an area(Circle) around the center point you want to search. Any mob found in the area is Ignored and not pulled. You can use this function to BLOCK out areas inside/overlapping your existing Pull MaxRadius. Note: MobsToPull Entries, if found will override/ignore PullLocs.
Note: Mobs that names start with a #. You must include the # in the name for MobsToPull, MobsToIgnore.

/mac kissassist manual - starts kissassist with everything turned off. You may then use In Game Commands to turns certain things on, such as /buffson, /healson, /dpson, etc.

Add memorized spells by their gems to the ini file
THIS WILL OVERWRITE CURRENT ENTRIES.

This feature is just to speed up setup. You still need to edit your ini file.

Change to how many slots you need in Your MQ2 folder/macros/kissassist.mac file. Default 6

These settings have been added by request and are not officially supported.

This requires you to manually add the section to your ini file.

Things you need to know about chain pulling, but you never thought about.

So now your all set to start chain pulling, but things just aren't working as expected. The puller is not running out and pulling mobs like you expect. Well your in luck, we added a way to see what the puller is doing. Or in your case, not doing.

You can now turn on/off chain pulling spam/debug messages. Use the /debug ChainP 1 to start the messages and /debug ChainP 0 to turn them off.

Using the DPS meter in kiss is now dependent on the MQ2DPSAdv plugin. The plugin comes with its own UI that will load, if setup properly. See the Plugin's instructions for more information. If you want this window closed when starting kissassist. Then use the new [StartupCommands] section and add an entry to close the window.
Example: Command1=/invoke ${Window[dpsadvwnd].DoClose}

The following settings and explanation only applies if UseMQ2Melee ini entry is turned off and during Combat.

For those of you who just have to have a hot key to pound on. Here are some examples that you can use to trigger the Buffer to give you what you need.

There are a few assumptions made when Buff begging. First assumption is the beggar only begs for the buff if he needs it. There are no additional conditions for the caster to check. If you begged for a buff, then you know what you are asking for.

Using a condition, on an entry in the buffs section that is a begfor entry, does not get checked. The condition is useless. For items, the logic checks the quantity you have against what is in the entry, and for buffs it checks if you have the buff or not.

From the casters side the buff entry is looked at as a normal buff entry.

are processed identically in the buffs routine when the caster is checking buffs. You can also use Buffs1=Shining Aegis|dual|Shining Defense|alias|Symbol|cond1 and create a condition. The condition is checked in the normal buffing routine, but is ignored when casting on a character that begged for it.