I tried doing a search about what folks felt was a good / optimal UI for use with the tools here at RG, but did not see too much recent info. I did see a thread where @Sic attached his most recent update / modification of Zliz, but I tried to use it, the generated UIerror file was huge. It kept saying missing such and such and trying to use files from the default. Almar over at Almar's guide has a screen shot of his set-up but he has 50 gazillion hot keys because he said he was doing a fair amount of command broadcasting.

Appreciate any info. What do folks think about Sparxx? The screen shots looked semi-minimalist.

Thanks. Be well.
Sort by date Sort by votes


the "missing files using from default" is correct and intended - if the file isn't modified, you should use the eq file in case it gets updated and changed. which is what that is telling you. "there wasn't a modified file here so we're going to look in this other place to load it"


> EQInterface < is kind of the defacto go-to place for UIs - it isn't as active as it was in yesteryear, but folks that keep updated UIs usually have them there
Upvote 0 Downvote
S

There is a heap of different ones to choose from - and the best thing is - Drakah is always up to date when EQ break's something.

There are a heap of different Drakah Made UI's on the EQ Interface website. 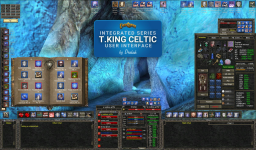 T.KIng I think I used his spell gems as add in pieces 18 or 19 years ago. I am trying to come back to EQ to go memory lane, but it seems like a totally different game.
Upvote 0 Downvote

I use the same as above. TKing's Celtic. I have mine shifted a little differently, but it is the same. Took me a bit to tweak how I wanted and he usually updates from Test, so it works on live immediately after patch.
Upvote 0 Downvote
You must log in or register to reply here.

D
Question - Any suggestions for a tri box with Merc support?