Bard has both 7 and 14 day suspensions recently. Playing him strictly with ISBoxer now. It seems like Melody was unreliable. I found that some item clicks will lock up your songs completely and you have to zone to be able to cast.

Experimented a lot and found some in-game socials that work nearly 100% of the time without locking up the songs and ensuring that Melody gets played every time I engage a mob. Keep in mind I'm hitting a key on my SK and using ISBoxer to hit the appropriate key on the bard.

1. When I first engage a mob I invoke this social. I want to target what my MA has on target, then turn on attack, then use my bard epic, and then begin playing my melody. If I'm very good about mob placement I don't even have to adjust the bard's positioning. But routinely I play the bard on a separate PC and watch that his swings are hitting the mob. I found that if I /melody with no other parameters it will stop any melody that might be playing. Then I hit the epic that would normally lock up my song gems before launching the melody correctly. 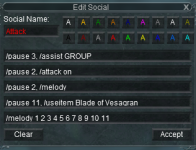 2. After a short delay to give my caster's time to slow and debuff the mob, I then hit a different key on my SK that causes my bard to use some discs and skills. I found the disc was best to be at the end here: 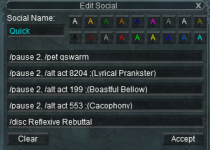 3. After yet more delay during which the casters would be doing some nukes I hit yet a 3rd key on the SK that does further damage: 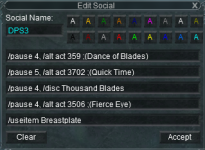 4. When the mob is done the bard continues to play those songs that do not require a target. Since this is end-game stuff I don't have to worry much about the bard grabbing aggro and dying. The SK is on KissAssist with a good Aggro management section. It means the tank has the good bard songs already active when the mob gets into camp. Here is my song loadout at this point. The first 4 songs will be active when there is no mob on target. 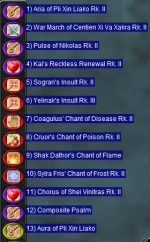 The whole purpose of this post was to share something so that /melody works reliably for each and every pull. There are things on a bard that are supposed to be instacast but still manage to interrupt melody. Very frustrating!

I usually /stopsong before I /melody. I also have hotkeys for starting my melodies on specific items. So that I can lead with something other in the twist (like, for example, Mez)

Due to this thread... https://www.redguides.com/community/threads/dual-invis.82636/

I finally created a Travel social on my bard! 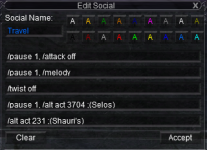 If ISBOXER is used just to switch screens , why would this be a problem for Daybreak ?

The ALT tab is too slow, is there any way to switch screens faster ?

Hulkman said:
If ISBOXER is used just to switch screens , why would this be a problem for Daybreak ?

The ALT tab is too slow, is there any way to switch screens faster ?
Click to expand...

Daybreak doesn't seem to have a problem with ISBoxer. I only posted this thread to show that there is some hope for simple automation even when you can't use MQ.

Rapid screen switching with ISBoxer is just a nice additional feature. Somehow ISBoxer allows the Windows video system a faster release and switch mechanism. In addition I can assign EQ clients to specific keystrokes, like Ctrl + Alt + 1 will bring up my 1st loaded EQ client, Ctrl + Alt + 2 brings up a second, etc. etc. Once your fingers learn these keystrokes then switching between characters is as rapid as your fingers can find and hit those keys. If you always load your characters in the same exact order then your fingers can instantly bring up your cleric for an emergency heal as an example.
You must log in or register to reply here.